New research from the U.S. Food and Drug Administration found that the chemicals in sunscreens absorb into your bloodstream at rates that exceed the FDA’s recommended limits.

Researchers wanted to find out whether the active ingredients — avobenzone, ecamsule, octocrylene and oxybenzone — of four commercially available sunscreens were absorbed into the bloodstream. 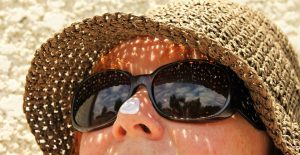 The 24 study participants used one of four different kinds of sunscreen — two sprays, a cream or a lotion — four times a day for four days on body parts not covered by a swimsuit.

All the levels of the chemicals were higher than the FDA’s recommended limit of 0.5 ng/mL within the first day, according to the study. Oxybenzone, for one, reached the mark within two hours of the first application.

In the past, FDA researchers have found oxybenzone in amniotic fluid, blood, breast milk and urine. In fact, some locations, like Hawaii and Key West, have banned people from using sunscreens with oxybenzone because of links to coral reef damage.

“I think it’s confusing,” Dr. Michele Green, a dermatologist with Lenox Hill Hospital in New York City, told U.S. News & World Report. “While it’s more than the FDA recommends for their toxicology, we really don’t know what that means in terms of human health. I would not want people to stop using sunscreen based on this one study.”

The group that represents sunscreen makers, the Consumer Healthcare Products Association, urged consumers to keep using the product as a preventative measure.

“Sunscreen manufacturers, FDA and dermatologists are aligned on the goal of protecting the public from the harmful effects of the sun,” the group’s statement said. “Sunscreens save lives and millions of Americans use these products on a daily basis to protect their health and the health of their families.”

See also, Americans Sitting More Than Ever Before, And Computers Get The Blame